Pregnancy 101: The science behind the wand of destiny 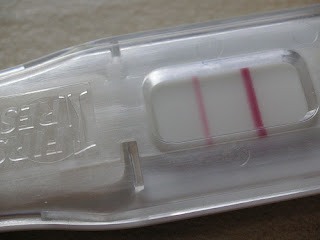 You hold a stick in your hands, one that you've just peed on. It foretells a future of sorts, for you. But the magic behind that stick is really all about a biochemical sandwich and a scientific test named ELISA.

Over and over again, that was all I could say.  At the same time, I heard my husband on the other side of the bathroom door, in a very panicked voice asking, “Why are you saying oh my god? WHAY ARE YOU SAYING OH MY GOD?!?!”

Though, he really knew why.

The events immediately preceding our synchronous freak out session involved unwrapping a small plastic wand, removing its lilac cap, and subsequently inserting its absorbent tip into my stream of pee. Yes, folks, we are talking about the wand of destiny that is the pregnancy test.
Shortly after that lucky sperm cell unites with the prized product of the ovulatory process, the egg, a woman will immediately begin to experience changes required for growing another human inside of her body. One of the first detectable signs of pregnancy is a surge in a hormone called human chorionic gonadotropin or hCG.
Once the fertilized egg finds a cozy resting place in the wall of the uterus (a process termed implantation), the production of hCG is significantly ramped up. On average, implantation usually takes about 8-10 days for normal, healthy pregnancies[1]. It is around this point on the baby growing timeline that home pregnancy tests can begin to detect the increased presence of hCG.
Chronologically speaking, we have sex, a sperm cell fertilizes an egg cell, said fertilized egg implants into uterus, our bodies up the production of hCG, and we pee on a stick to find out if all of these things really happened. But, exactly how do these little wands of destiny work?
The technology harnessed within the pregnancy test involves a biochemical assay called a “Sandwich ELISA” (ELISA = enzyme-linked immunoabsorbant assay, more on the “sandwich” part in a bit).  The general function of an ELISA is to detect (and sometimes quantify) the presence of a substance in a liquid. In the case of a home pregnancy test, the substance is hCG and the liquid part is our urine.
Once pee is applied to the pregnancy test, it travels along the absorbent fibers, reaching defined areas that are coated with molecules, called “capture” antibodies, specifically designed to capture hCG. To help you visualize antibody science, picture a lacrosse stick, except the mesh pocket can only fit one specific type of ball:

Now, back to the sandwich part. On a home pregnancy test, there are three separate zones containing capture antibodies. Using their sharp wit and radical humor, scientists came up with “sandwich” to describe this sort of ELISA as they felt it was analogous to two slices of bread surrounding some delicious filling. Hilarious, right? 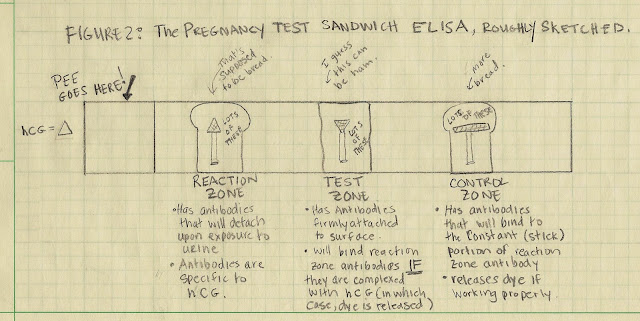 Ok, now that you’ve calmed down from laughing so hard, let us get back to the science. The first “slice of bread” is called the reaction zone, the “sandwich filling” is called the test zone, and the “last slice of bread” is called the control zone (see figure 2). Each of these zones is coated with capture antibodies, but differ from each other in how they work.
The antibodies on the reaction zone will capture only hCG and will detach from the strip upon exposure to urine. The test zone also contains capture antibodies that can only bind hCG, except they are securely attached to the absorbent strip, plus, there is an added dye. The control zone contains a general antibody (a lacrosse stick that will fit any ball) plus a dye, and serves to let the frantic user know that the test is functional.

As urine travels up the absorbent strip, it takes with it the reaction zone antibodies. If the urine is obtained from a pregnant woman, the reaction zone antibodies will be bound to hCG molecules found in the pee. When the pee solution reaches the test zone, there are two possible outcomes. If you are pregnant, the hCG/reaction zone antibody complexes will stick to the test zone antibodies and cause the dye to release (sometimes in a little “+” formation). If you are not pregnant, the reaction zone antibodies will just pass on through without saying hello.
The test culminates at the control zone, which is lined with general capture antibodies. Going back to picturing antibodies as lacrosse sticks, you will see that only the shape and size of the mesh pocket varies; the stick part is always the same. The general capture antibodies on the control zone will recognize and bind to the “stick” part of the reaction zone antibodies, and release a dye while doing so. This is how we know that the test worked correctly.
Biochemically speaking, the home pregnancy test is nothing but a soggy antibody sandwich that smells of urine. From a family planning standpoint, however, this technology can impact us in ways beyond belief. But, aside from the potential for the “are you pregnant” window to induce one into a hyperventilated state, the process happening within that handheld chemistry lab is actually quite impressive. In a matter of minutes, we can know if it is ok to go out and party with friends, or if it would be a better choice to stay in and begin to nest – all from the comfort of our own bathrooms. Three cheers for science!
For a cool animation showing how a pregnancy test works, go here. Visit WomensHealth.gov for more information about pregnancy tests.  Planned Parenthood offers scientifically accurate information about women's reproductive health. For blogs, check out this list on Babble, and this list on BlogHer.

Posted by EJ Willingham at 9:03 AM