Chemistry sets and the power of hands-on science 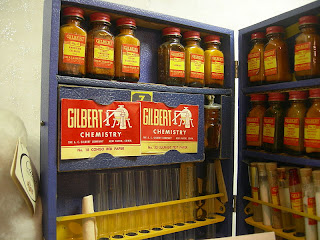 Gawker is a site that prides itself on its snark. We here at Double X Science are a sober {snork}, somber {blerp}, sincere {bwahahahahahaaha!} bunch, however. So when we saw, thanks to DXS contributor Dr. Rubidium, that Gawker writer John Cook had cheekily maligned...gasp...chemistry sets for kids in his post, "Horrible Christmas Gifts for the Children of People You Hate," of course our somber, sincere, sober, snarkless selves had to say something about that.

First, here's a little of what Gawker said:

"I can't fathom any parent voluntarily buying one for their child."
Struggle no more. I am one such parent.

"The 'sweet spot'...would be about 8 years old." Magical, isn't it?
That's exactly the age that I got mine! From my parents!

My personal experience was that a chemistry set flipped the flickering light of my interest in science permanently to "on." As my author biography attests, it was the preserved frog in the chemistry set that I received at, yes, age 8 that set off a lifetime of scientific pursuit.

And I'm not alone about that frog. Interested to find out of other science-bent folk had also fallen in love with science over a chemistry set, I sent out a Twitter appeal last night in the role of Double X Science SciMaven:

If you ever got a chemistry set as a gift...how did you feel abt it? If you have a child...same Q.

Here are some of the responses I received.

Now the Daddle? We're on board with the ridiculousness of that.