Pregnancy 101: Fertilization is another way to come together during sex

It was September of 2006. Due to certain events taking place on a certain evening after a certain bottle (or two) of wine, my body was transformed into a human incubator. While I will not describe the events leading up to that very moment, I will dissect the way in which we propagate our species through a magnificent process called fertilization. 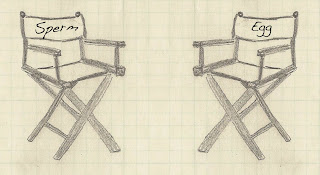 During the fertilization play, there are two stars: the sperm cell and the egg cell. The sperm cell hails from a male and is the end product of a series of developmental stages occurring in the testes. The egg cell (or ovum), which is produced by a female, is the largest cell in the human body and becomes a fertilizable entity as a result of the ovulatory process. But to truly understand what is happening at the moment of fertilization, it is important to know more about the cells from which all human life is derived.

Act I: Of sperm and eggs 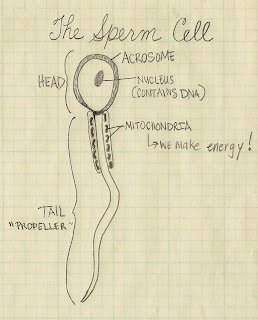 A sperm cell is described as having a “head” section and a “tail” section. The head, which is shaped like a flattened oval, contains most of the cellular components, including DNA. The head also contains an important structure called an acrosome, which is basically a sac containing enzymes that will help the sperm fuse with an egg (more about the acrosome below). The role of the tail portion of sperm is to act as a propeller, allowing these cells to “swim.” At the top of the tail, near where it meets the head, are a ton of tiny structures called mitochondria. These kidney-shaped components are the powerhouses of all cells, and they generate the energy required for the sperm tail to move the sperm toward its target: the egg. 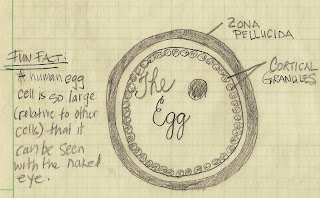 The egg is a spherical cell containing the usual components, including DNA and mitochondria. However, it differs from other human cells thanks to the presence of a protective shell called the zona pellucida. The egg cell also contains millions of tiny sacs, termed cortical granules, that serve a similar function to the acrosome in sperm cells (more on the granules below).


Act II: A sperm cell’s journey to the center of the universe female reproductive system
Given the cyclical nature of the female menstrual cycle, the window for fertilization during each cycle is finite. However, the precise number of days per month a women is fertile remains unclear. On the low end, the window of opportunity lasts for an estimated two days, based on the survival time of the sperm and egg. On the high end, the World Health Organization estimates a fertility window of 10 days. Somewhere in the middle lies a study published in the New England Journal of Medicine, which suggests that six is the magic number of days. 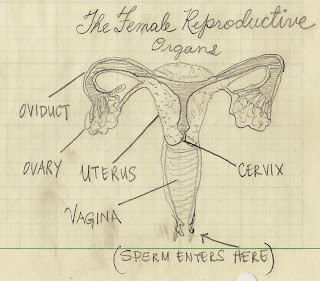 Assuming the fertility window is open, getting pregnant depends on a sperm cell making it to where the egg is located. Achieving that goal is not an easy feat. To help overcome the odds, we have evolved a number of biological tactics. For instance, the volume of a typical male human ejaculate is about a half-teaspoon or more and is estimated to contain about 300 million sperm cells. To become fully active, sperm cells require modification. The acidic environment of the vagina helps with that modification, allowing sperm to gain what is called hyperactive motility, in which its whip-like tail motors it along toward the egg.

Once active, sperm cells begin their long journey through the female reproductive system. To help guide the way, the cells around the female egg emit a chemical substance that attracts sperm cells. The orientation toward these chemicals is called chemotaxis and helps the sperm cells swim in the right direction (after all, they don’t have eyes). Furthermore, sperm get a little extra boost by the contraction of the muscles lining the female reproductive tract, which aid in pushing the little guys along. But, despite all of these efforts, sperm cell death rates are quite high, and only about 200 sperm cells actually make it to the oviduct (also called the fallopian tube), where the egg awaits.
Act III: Egg marks the spot
With the target in sight, the sperm cells make a beeline for the egg. However, for successful fertilization, only a single sperm cell can fuse with the egg. If an egg fuses with more than one sperm, the outcome can be anything from a failure of fertilization to the development of an embryo and fetus, known as a partial hydatidiform mole, that has a complete extra set of chromosomes and will not survive. Luckily, the egg has ways to help ensure only one sperm fuses with it.

When it reaches the egg, the sperm cell attaches to the surface of the zona pellucida, a protective shell for the egg. For the sperm to fuse with the egg, it must first break through this shell. Enter the sperm cell’s acrosome, which acts as an enzymatic drill. This “drilling,” in combination with the propeller movement of the sperm’s tail, helps to create a hole so that the sperm cell can access the juicy bits of the egg.

This breach of the zona pellucida and fusion of the sperm and egg sets off a rapid cascade of events to block other sperm cells from penetrating the egg’s protective shell. The first response is a shift in the charge of the egg’s cell membrane from negative to positive. This change in charge creates a sort of electrical force field, repelling other sperm cells. 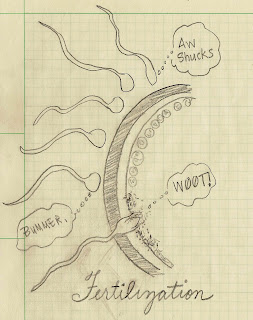 Though this response is lightning fast, it is a temporary measure. A more permanent solution involves the cortical granules within the egg. These tiny sacs release their contents, causing the zona pellucida to harden like the setting of concrete. In effect, the egg–sperm fusion induces the egg to construct a virtually impenetrable wall. Left outside in the cold, the other, unsuccessful sperm cells die within 48 hours.

Now that the sperm–egg fusion has gone down, the egg start the maturation required for embryo-fetal development. The fertilized egg, now called a zygote, begins its journey into the womb and immediately begins round after round of cell division, over a few weeks resulting in a multicellular organism with a heart, lungs, brain, blood, bones, muscles, and hair. It’s an amazing phenomenon that I’m honored to have experienced (although I didn’t know I was until several weeks later).

The Afterword: A note on genetics
A normal human cell that is not a sperm or an egg will contain 23 pairs of chromosomes, for a total of 46 chromosomes. Any deviation from this number of chromosomes will lead to developmental misfires that in most cases results in a non-viable embryo. However, in some instances, a deviation from 46 chromosomes allows for fetal development and birth. The most well-known example is Trisomy 21 (having three copies of the 21st chromosome per cell instead of two), also called Down’s Syndrome.

The egg and sperm cells are unlike any other cell in our body. They’re special enough to have a special name, gametes, and they each contain one set of chromosomes, or 23 chromosomes. Because they have half the typical number per cell, when the egg and sperm cell fuse, the resulting zygote contains the typical chromosome number of 46. Now you know how we get half of our genes from our father (who made the sperm cell) and half from our mother (who made the egg cell). Did I just put in your head an image of your parents having sex? It’s the birds and the bees, folks—it applies to everyone!

This one is great as it has more of a sci-fi Death Star appeal:

References and further reading:
Posted by EJ Willingham at 9:44 AM