Pregnancy 101: On the cervical mucus plug and why I’ve never been more happy to hold something so disgusting in my hand

June 3rd, 2007 fell on a Sunday. I awoke that morning feeling disappointed that I was still pregnant. My due date had come and gone and, honestly, I was sick of being a human incubator. I had enough of the heartburn, involuntary peeing, and the overall beached-whale feeling. The baby in utero was resting comfortably on my sciatic nerve, and I could barely walk. And perhaps even more important was the fact that I just wanted to finally meet the child I had grown from just a few cells!

Feeling like it would never come to be, I slowly waddled into the bathroom and somehow negotiated the tall edge of the bathtub in order to take a shower. As I stood allowing the hot water to pour down my back, I looked down at the giant watermelon growing from my abdomen and literally began to beg. “Little baby, please please PLEASE make your way out today!” Right at that moment, and I kid you not, my cervix released my mucus plug and deposited it into the palm of my hand.
Video of a mucus plug being poked and prodded with tweezers. Watch at your own risk.
Suddenly, I saw the light at the end of the pregnancy tunnel. I excitedly called for my husband. “Jim! You have to come see this!!” He came running in as he was already on edge, given the circumstances. “My mucus plug came out! Do you want to see it?” As much as he tried to resist looking at something that was potentially grotesque (and it was), instinct overrode logic. His actions did not match the words coming out of his mouth, which were along the lines of “hell no!” and, like Sauron responding to the wearing of the ring, his eyes were slowly drawn down to what was gently wobbling in the palm of my hand.
The human eye is poised for setting its gaze upon things that are aesthetically pleasing and the mere mention of the word “mucus” could potentially elicit a queasy feeling in one’s gut. However, mucus plays a significant biological role in our bodies. In general, the mucus serves as a physical barrier against microbial invaders (bacteria, fungi, viruses) and small particulate matter (dust, pollen, allergens of all kinds). Protective mucus membranes line a multitude of surfaces in our bodies, including the digestive tract, the respiratory pathway, and, of course, the female reproductive cavity. 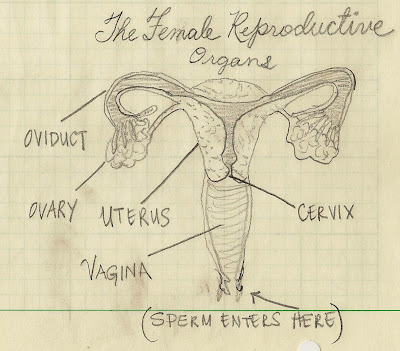 But when it comes to matters of ladybusiness, the function of mucus goes beyond that of a microbial defense system. Produced by specialized cells lining the cervix, which is the neck of the uterus and where the uterus and vagina meet, mucus also plays a role in either facilitating or preventing sperm from traveling beyond the vagina and into the upper reproductive tract.
For instance, cervical mucus becomes thinner around the time of ovulation, providing a more suitable conduit for sperm movement and swimming (presumably toward the egg). Furthermore, some components from this so-called “fertile” cervical mucus actually help prolong the life of sperm cells. Conversely, after the ovulation phase, normal hormonal fluctuations cause cervical mucus to become thicker and more gel-like, acting as a barrier to sperm. This response helps to prepare the uterus for pregnancy if  fertilization happens.
During pregnancy, a sustained elevation of a hormone called progesterone causes the mucus-secreting cells in the cervix to produce a much more viscous and elastic mucus, known as the cervical mucus plug. In non-scientific terms, the mucus plug is like the cork that keeps all of the bubbly baby goodness safe from harmful bacteria. It is quite large, often weighing in around 10 g (0.35 oz) and consists mostly of water (>90%) that contains several hundred types of proteins. These proteins do many jobs, including immunological gatekeepers, structural maintenance, regulation of fluid balance, and even cholesterol metabolism (cholesterol is an ever important component of healthy fetal development). 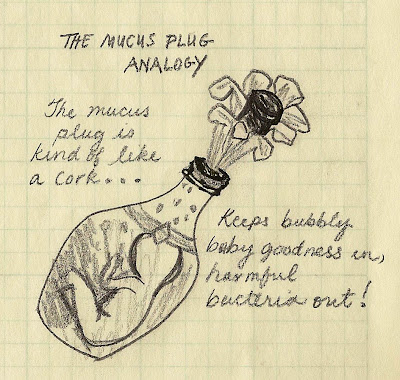 Last week, I told the story of my two births, including the loss of my mucus plug, at an event called The Story Collider. I described the mucus plug as “a big hot gelatinous mess.” I pushed it a bit further by providing the following graphic imagery: “Picture a Jell-O jiggler, but instead of brightly colored sugar, it’s made up of bloody snot.” I was pleased with the audience response, which mostly consisted of animated face smooshing accompanied by grossed-out groans and sighs. For the rest of the evening, I heard people call to me from all over the bar by screaming “MUCUS PLUG!!!” Given the importance of the mucus plug during pregnancy (and mucus in general) combined with its comedic potential, its no wonder that it was a hit. Go mucus!