The real scandal: science denialism at Susan G. Komen for the Cure®

Double X Science is pleased to be able to repost, with permission, this important piece courtesy of author Christie Aschwanden and the Last Word on Nothing website, focused on the things that science teaches us we still don't know...but want to find out.
You'll notice that the focus of this article is the way that the Komen foundation blames the individual with the disease for having it, relying on what Aschwanden aptly calls "breast cancer's false narrative." This "blame the person" tactic seems to be especially common in women's health, with an emphasis on the way a woman allegedly does the wrong thing or thinks the wrong thoughts or doesn't work hard enough willing herself well, making her disease her fault, instead of the fault of nature, mutations, cell division gone astray, and the countless other molecular factors that accumulate into what we call "disease." In the case of breast cancer, it's not one monolith of disease that the decision to screen will magically stop.
Many thanks to Christie Aschwanden and the Last Word on Nothing for graciously agreeing to this important repost. --The DXS Editors --------------------------------------------
The real scandal: science denialism at Susan G. Komen for the Cure® 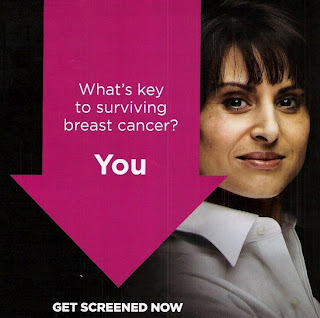 Is breast cancer threatening your life? This Susan G. Komen for the Cure® ad leaves no doubt about who’s to blame —you are.
Over the last week or so, critics have found many reasons to fault Susan G. Komen for the Cure®. The scrutiny began with the revelation that the group was halting its grants to Planned Parenthood.  The decision seemed like a punitive act that would harm low-income women (the money had funded health services like clinical breast exams), and Komen’s public entry into the culture wars came as a shock to supporters who’d viewed the group as nonpartisan.* Chatter on the intertubes quickly blamed the move on Komen’s new Vice-President of Public Policy, Karen Handel, a failed GOP candidate who ran for governor in Georgia on a platform that called for defunding Planned Parenthood.** Komen’s founder, Ambassador Nancy Brinker, awkwardly attempted to explain the decision, and yesterday, Handel resigned her position. (Whether she’ll receive a golden parachute remains unclear, but former CEO Hala Moddelmog received $277,864 in 2010, despite her resignation at the end of 2009.)
The Planned Parenthood debacle brought renewed attention to other controversies that have hounded Komen in recent years—like its “lawsuits for the cure” program that spent nearly $1 million suing groups like “cupcakes for the cure” and “kites for the cure” over their daring attempts to use the now-trademarked phrase “for the cure.” Critics also pointed to Komen’s relentless marketing of pink ribbon-themed products, including a Komen-branded perfume alleged to contain carcinogens, and pink buckets of fried chicken, a campaign that led one rival breast cancer advocacy group to ask, “what the cluck?” But these problems are minuscule compared to Komen’s biggest failing—its near outright denial of tumor biology. The pink arrow ads they ran in magazines a few months back provide a prime example. “What’s key to surviving breast cancer? YOU. Get screened now,” the ad says. The unmistakeable takeaway? It’s your fault if you die of cancer. The blurb below the big arrow explains why. “Early detection saves lives. The 5-year survival rate for breast cancer when caught early is 98%. When it’s not? 23%.”
If only it were that simple. As I’ve written previously here, the notion that breast cancer is a uniformly progressive disease that starts small and only grows and spreads if you don’t stop it in time is flat out wrong. I call it breast cancer’s false narrative, and it’s a fairy tale that Komen has relentlessly perpetuated.
It was a mistake that most everyone made in the early days. When mammography was new and breast cancer had not yet become a discussion for the dinner table, it really did seem like all it would take to stop breast cancer was awareness and vigilant screening. The thing about the false narrative is that it makes intuitive sense–a tumor starts as one rogue cell that grows out of control, eventually becoming a palpable tumor that gets bigger and bigger until it escapes its local environment and becomes metastatic, the deadly trait that’s necessary to kill you. And this story has a grain of truth to it—it’s just that it’s far more complicated than that.
Years of research have led scientists to discover that breast tumors are not all alike. Some are fast moving and aggressive, others are never fated to metastasize. The problem is that right now we don’t have a surefire way to predict in advance whether a cancer will spread or how aggressive it might become. (Scientists are working on the problem though.)
Some breast cancers will never become invasive and don’t need treatment. These are the ones most apt to be found on a screening mammogram, and they’re the ones that make people such devoted advocates of mammography.H. Gilbert Welch of the Dartmouth Institute for Health Policy and Clinical Practice, calls this the overdiagnosis paradox. Overdiagnosis is what happens when a mammogram finds an indolent cancer. A healthy person whose life was never threatened by breast cancer is suddenly turned into a cancer survivor. She thinks the mammogram saved her life, and so she becomes an advocate of the test.
Some cancers behave just the opposite of these slow-growing, indolent ones. Researchers now know that some cancers are extremely aggressive from the start. There’s simply no such thing as “early” detection for these cancers. By the time they’re detectable by any of our existing methods, they’ve already metastasized. These are the really awful, most deadly cancers, and screening mammograms*** will not stop them.
Then there are cancers that fall somewhere in between the two extremes. These are the ones most likely to be helped by screening mammography, and they’re the lives that mammography saves. How many? For women age 50 to 70, routine screening mammography decreases mortality by 15 to 20% (numbers are lower for younger women). One thousand women in their 50′s have to be screened for 10 years for a single life to be saved. So let’s recap. Getting “screened now,” as the Komen ad instructs can lead to three possible outcomes. One, it finds a cancer than never needed finding. You go from being a healthy person to a cancer survivor, and if you got the mammogram because of Komen’s prodding, you probably become a Komen supporter. Perhaps a staunch one, because hey—they saved your life and now you have a happy story to share with other supporters. Another possibility is that the mammogram finds a cancer that’s the really bad kind, but you die anyway. You probably don’t die later than you would have without the mammogram, but it might look that way because of a problem called “lead time bias.” The third possibility is that you find a cancer that’s amenable to treatment and instead of dying like you would without treatment, your life is saved. Here again, you’re grateful to Komen, and in this case, your life truly was saved.
Right now, breast cancer screening sucks. It’s not very effective, and if you measure it solely based on the number of lives saved versus healthy people unnecessarily subjected to cancer treatments, it seems to cause more harm than good. For every life saved, about 10 more lives are unnecessarily turned upside down by a cancer diagnosis that will only harm them. In a study published online in November, Danish researchers concluded that, “Avoiding getting screening mammograms reduces the risk of becoming a breast cancer patient by one-third.”
But it’s not quite that simple. Some people really are helped by mammography screening, and if you’re the one helped, it’s hard to discount that one life. Right now mammography is the best tool we have. Welch, who has spent more time than probably anyone else in America studying this issue, has deemed the decision about whether or not to get breast cancer screening a “close call.”
Reasonable women can decide that for them, the potential benefits outweigh the risks. Other reasonable women will decide that for them, the risks outweigh the potential benefits.
Komen isn’t wrong to encourage women to consider mammography. But they’re dead wrong to imply that “the key to surviving breast cancer” is “you” and the difference between a 98% survival rate and a 23% one is vigilance on the part of the victim. This message flies in the face of basic cancer biology.
Between 2004 to 2009, Komen allocated 47% of it $1.54 billion toward education and screening.  Much of its education messaging promotes the same false narrative as its ads, which means they are not only not furthering the search for a cure, they are harming the cause. By implying that the solution to breast cancer is screening, Komen distracts attention from the real problem, which is that way too many women (and men) are still dying of breast cancer, and screening is not saving them. We still can’t prevent breast cancer, because we don’t know what causes it.
To explain why Komen’s fixation on an unscientific story matters, I want to introduce you to Rachel Cheetham Moro. Moro was a cancer blogger, but she won’t be weighing in on this latest Komen controversy, because she died Monday of metastatic breast cancer. Before she left us, she had plenty to say about the false narrative Komen was peddling. Last October she wrote, I’m an independent journalist, essayist and science nerd. I’ve written for more than 50 publications on topics ranging from placebos to prairie dogs, but I’m especially interested in belief, sense of place and the after-effects of war. I was a National Magazine Award finalist in 2011 and a Pulitzer Center for Crisis Reporting fellow in 2007.
I live on a small farm perched on a sunny slope of the Grand Mesa in western Colorado where my winemaker husband tends our vineyard, orchard and garden, and I raise a flock of heritage poultry. My coffee table book about chicken breeds, Beautiful Chickens, was published this year. Website. Twitter.

Posted by EJ Willingham at 9:36 AM