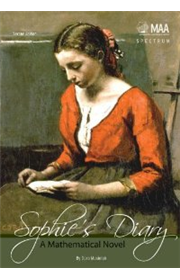 Today we enjoy a bit of math, as told in Sophie’s Diary: A Mathematical Novel. Written by Dr. Dora Musilek, this novel was inspired by the French mathematician Sophie Germain, an important contributor to number theory and mathematical physics. Her correspondence with some of history’s great mathematicians such as Lagrange, Legendre, and Gauss are known while her life prior to that is shrouded in the unknown. Dr. Musilek explored Germain’s early life and uses the concept of an adolescent’s diary to discuss how Germain may have taught herself math while dealing with the social upheaval of the French Revolution, which occurred at this time in her life. Read on for an engaging lesson in math.

I begin the new year with more determination and a renewed resolve to study prime numbers. One of my goals is to acquire the necessary mathematical background to prove theorems.

And now we skip ahead to another excerpt where differential calculus is described.

I feel strong enough to resume my studies. My mind is clear again to meet the challenges of a new topic that at ﬁrst seemed insurmountable. I resumed my studies of differential calculus.

There is something magical about Inﬁniment petits. I went back to the basic deﬁnition: “a derivative of a function represents an inﬁnitesimal change in the function with respect to whatever parameters it may have.” The simple derivative of a function f with respect to x is denoted by f’(x), which is the same as df/dx. Newton used ﬂuxions notation dz/dt = ż, but it means the same, so I will use f’ or df/dx from now on. Well, I can now take the derivative of certain classes of functions because I just follow certain rules.

Taking derivatives is so easy! I could spend hours deriving more complicated functions. However, I wish to learn also how to see the world through mathematics. I must ﬁnd the connection between differential equations and physics. I am eager to explore this applied aspect of mathematics.

Let’s start with a differential equation, an equation involving an unknown function and its derivatives. It can be relatively easy such as

or a bit more complicated such as the linear differential equation:

or even a nonlinear equation such as this:

A differential equation is linear if the unknown function and its derivatives appear to the power 1 (products of these are not allowed) and nonlinear otherwise. The variables and their derivatives must always appear as a simple ﬁrst power. Nonlinear equations are difﬁcult to solve and some are impossible.

First I need to master linear equations. Some mathematicians use the notation y’ for the dy/dx derivative, or y’’ for d2y/dx2, and so forth. Thus, the previous linear equation would be written as (x2 + 1)y’ + 3xy = 6x. I need to keep these differences of notation in mind, since I am studying from ﬁve different books.

Mathematically, if k > 0, then the population grows and continues to expand to inﬁnity. On the other hand, if k < 0, then the population will shrink and tend to 0. Clearly, the ﬁrst case, k > 0, is not realistic. Population growth is eventually limited by some factor, like war or disease. When a population is far from its limits of expansion, it can grow exponentially. However, when nearing its limits, the population size can ﬂuctuate. Well, I think that the equation I use to predict the rate of change of population can be modiﬁed to include these factors to obtain a result closer to reality.

Aristotle thought that nature could not be expected to follow precise mathematical rules. But Galileo argued against this point of view. He envisioned the experimental mathematical analysis of nature to be used to understand it. Newton was inspired by Galileo and later developed the laws of motion and universal gravitation. Newton, Leibniz, Euler, and other great people then created the mathematics that help us converse with the universe.

Oh, how glorious it is to speak such a language and understand the whispers from the heavens and the world around me.

These views are the opinion of the author and do not necessarily either reflect or disagree with those of the DXS editorial team.
Posted by Adrienne at 8:47 AM