It is no mystery that there are few women who work in the construction industry. For years the sector has been overwhelmingly male dominated, with women making only 9.6% of the construction industry workforce. The industry, while remaining male dominated, has been increasingly facing a crisis due to the lack of available qualified workers. As the demand for labor surpasses the supply, construction companies expand their recruitment efforts, including a formerly untapped labor source, women. Construction jobs allow for upward mobility directly linked to years of experience and ability to do the work well, making it a desirable career choice for many. However, while sex discrimination is illegal, many construction sites have anti-women attitudes, making construction jobs less desirable and/or torturous for women.

The United States Department of Labor Advisory Committee on Construction Safety and Health reported in 1999 that 88% of women construction workers surveyed had experienced sexual harassment at work. I searched high and low for more current data, but no extensive study has been done since then. Most recent information I found would just claim that things are "getting better" for women in construction, and while I don't deny that there are more women in construction fields, I am not convinced that sexual harassment and bullying is a thing of the past. Progress is great, but a hostile environment affects a person's ability to do their job correctly. I know first hand because it happened to me.

I studied Civil Engineering, and most Engineering students know that in order to improve one's chances of getting hired when you graduate you should have at least one internship or apprenticeship during your undergraduate studies. Internships give you some real life experiences that are just impossible to get from a classroom. During my sophomore year of Engineering school I applied and was hired for an internship as a Construction Manager Assistant for a major construction management company in New York City. My work consisted of being in a construction site and maintaining the project schedule by monitoring project progress, coordinating activities among the different trades, and resolving problems. The finished product was to be a high-rise residential building overlooking Central Park. To this day I am grateful for all that I learned while in a construction site. That experience has helped me along in my professional career in more ways than I can imagine, from dealing with a team, to learning how to schedule major projects. However, being one female out of a total of about 10 women in a site with hundreds of men, was quite alienating and frustrating, at times.

The first day of my internship I arrived with three other interns, two young men and one other female. After being briefed on job site safety we were asked to visit the project's head foreman, who called in two of his construction managers who would become our mentors. The first manager that arrived looked at all of us and immediately stated "I'll take the two boys" and feeling a need to apologize, looked at me and the other female intern and said "sorry ladies, I don't deal with women on this job." Shortly after another manager arrived, upon seeing us two waiting he said "arethese the interns? I was expecting a couple of guys." Since we were all that was left he had no choice. He led us to a Field Engineer, a recent college graduate and the only other woman on site that day, and told her to "take care of us." Apparently, he could not be bothered with being our mentor.

Throughout the summer the two male interns were given jobs overseeing major tasks relating to mechanical equipment, electrical work, and concrete pouring, while the other female intern and I were asked to check if the finished apartments were painted, the marble was installed in the bathrooms, and the light fixtures were properly centered. It was easy to see that as females, we were given the tasks that required the least amount of effort and intelligence. After all, who goes to Engineering school to learn how to watch paint dry? It was aggravating to be doing such boring work; we wanted to be involved in actual construction tasks so as to truly learn engineering techniques applied in the field. After a few weeks of unsuccessfully trying to ask our mentor to give us more interesting work, we decide to seek help from the only female construction manager on site. She was a 50 year old Puerto Rican woman named Milly, who used to be a secretary for the company and fell in love with construction. She paid her way through night school and earned a degree in Mechanical Engineering. After finishing her degree she was hired as a Construction Manager overseeing all the mechanical trades.

Milly became our mentor and made sure that we were always learning something from the tasks we were assigned. She also encouraged us to work separately because, as she would say "you'll probably be the only woman on any site, better get used to it." As expected, the work that we were given required us to constantly be around the tradesmen working, as opposed to before when we were mainly in empty finished apartments. I can only speak for myself, because I never asked the other female female intern how she felt or what kind of treatment she received, but it was at this point that I became the target of a lot of sexist, rude, and inappropriate remarks from some of the men. Many times as I walked on by, working men who would stop their work to stare and wolf whistle. Several times a day I had to say "no thank you" to men asking for my number or requesting to take me out on a date. On a few occasions I got called a bitch for refusing to reply to inappropriate remarks. Some men felt the need to give me "get fit" advice and make comments about my body, often pointing at my lack of physical strength as a sign of why I did not belong on a construction site: never mind that technological advances and strict safety codes has made the use of physical strength obsolete in most jobs. Once, I found myself in the middle of a storage room with one construction worker (whom I had never seen before that day) blocking the doorway and refusing to let me leave unless I accepted his request for a date.

I worked on the site for a year, after which I decided the stress of a workplace where I constantly felt harassed, belittled, and intimidated was not worth the effort. The constant fear that someone would make me feel uncomfortable or make a rude remark was making me lose my concentration, and on an active construction site, that is an actual safety hazard. I requested to work with the Project Managers who dealt with the Engineering consultants from the main office and only went on site for field meetings. Today, I am better equipped to deal with everyday sexism, but at 18 years old I was not. I never did report any of the many incidents of sexism and harassment that I endured. I was reluctant to do so for fear of being tagged as a complainer who could not handle the job.

Writing this was one of the hardest things I've had to do. I still love the construction industry and promote it as a great career choice for men and women who enjoy being active on their jobs.  For every man that demeaned me, there were dozens who uplifted me. For every man that made a sexist comment, there were scores who respected me and valued my work. For every man that harassed me, there were hundreds more who protected me as their coworker. The issue is not that all men refuse to work with women, the issue is that a few men who do not, make the working environment hostile and dangerous for women. Those few that harassed me had the power to ruin my day, alter my mind, and destroy my self confidence. We need to increase the number of women in the construction industry so that we are not a rarity. We must also encourage labor unions and construction employers to include sexual harassment training as part of their health and safety plans. Women deserve to have access to skilled trades, and they deserve to be respected as a fellow colleague. 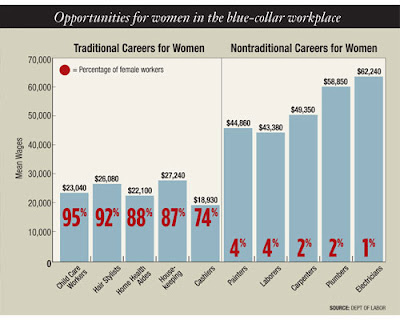 [Patricia Valoy is a Civil Engineer and an Assistant Project Manager at STV, an architectural, engineering, planning, environmental and construction management firm based in New York City. She is a graduate of the Columbia University School of Engineering in Applied Science, where she majored in Civil Engineering with a concentration in Construction Management. Patricia also is a co-host of a weekly radio show called, “Let Your Voice Be Heard.” The show’s mission is to spread awareness of social and political issues. In addition, she writes a blog about feminist issues and mentors high school and college students interested in pursuing careers in STEM fields. You can follow Patricia on Twitter at @besito86 and read her blog at www.patriciavaloy.blogspot.com.]

Posted by EJ Willingham at 9:38 AM