A while back, I wrote about one of the most common ways of making electric light: fluorescent bulbs. Understanding fluorescent lights requires quantum mechanics! While a lot of quantum physics seems pretty removed from our daily lives, it's essential to most of our modern technology. In fact, reading what I'm writing requires quantum mechanics, since you are using a computer (maybe a handheld computer like an iPad or smart phone, but it's still a computer) or a printout from a computer. 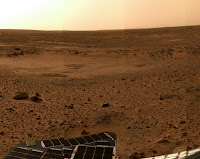 On Mars, the sky is pink during the day, shading to blue at sunset. What planet did you think I was talking about?

On Earth, the sky is blue during daytime, turning red at as the sun sinks toward night.

Well, it's not quite as simple as that: if you ignore your dear sainted mother's warning and look at the Sun, you'll see that the sky immediately around the Sun is white, and the sky right at the horizon (if you live in a place where you can get an unobstructed view) is much paler. In between the Sun and the horizon, the sky gradually changes hue, as well as varying through the day. That's a good clue to help us answer the question every child has asked: why is the sky blue? Or as a Martian child might ask: why is the sky pink? 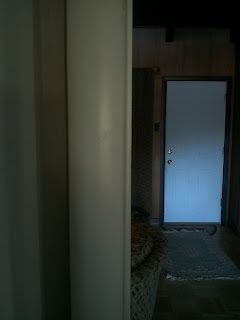 As I sit and type this in my study, I can hear my cats crashing around the living room, which is around the corner from me. There's a wall between us, so I can't see them or shoot them with my water pistol (which I would be tempted to do if they were in the same room, before they knock over something fragile). So, just like in my earlier post on mirrors, we'll start with a question: why can I hear my cats around the corner, but not see them?

Nearly every kid has asked some variation on the question, "Why do mirrors switch left and right, but not up and down?" Maybe you still ask yourself that question too - it doesn't seem to make sense. After all, there's nothing special about "left and right" vs. "up and down" as far as a mirror goes. If you lean sideways, it still looks like your left and right are being switched, leaving your up and down the same.